skip to main | skip to sidebar

I got myself a recumbent bike a while ago. It's not a racing machine, but very relaxing. It's even in its name: Batavus Relaxx4all.

Was a bargain and it's fun to cruise. 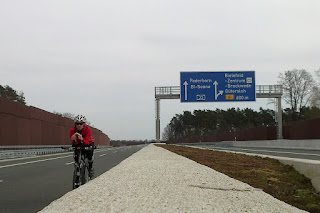 It'sa bit longer since I rode the last brevet - in fact it was the 300 ride through the Black Forrest/Jura in the year 2010. That pause was too long. Hence, I took opportunity and ended that too long break: A 300km tour through the well known and pretty hilly Weserbergland with an accumulated height of about 3500 meters was on schedule last Saturday. And while 4 years went by since my last brevet, the key features are still the same. It's long, it's hard, it's kind of fun. But actually it was a rather hard bread to eat - my general fitness state may be quite okay but I literally don't remember when I rode more than 100km in a row (probably it was last year midsummer). Anyway, all in all it was fine, took a bit longer than expected, made the same mistakes as always (too fast in the beginning, suboptimal eating and drinking - nothing desasterous though). Weather was rather okay - mild with a bit of sun and a little rain in the evening, but thunder and lightning passed me by. Was happy to have returned after the 300km and felt happy asleep later. Next day was required for recovery. This brevet will probably be my only one for this year (don't have time at the other dates), but I shouldn't wait another 4 years to do the next brevet. Bonne route!
um 23:33 Keine Kommentare: 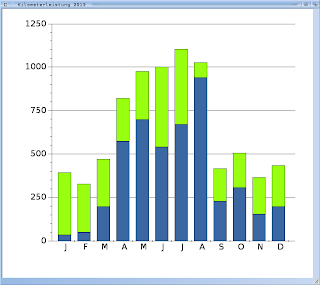 Me against the storm "Xaver"

Today I was fighting with my bike against the storm "Xaver". Oh dear, that was massive! Had to go only 20km, but it was actually a good piece of work. The risk was rather low as the storm was blowing pretty constant, not at its maximum strength (but really strong already) and straight from the front. But 20km can feel like quite a distance. Anyway, was a cool ride.
um 00:19 Keine Kommentare: